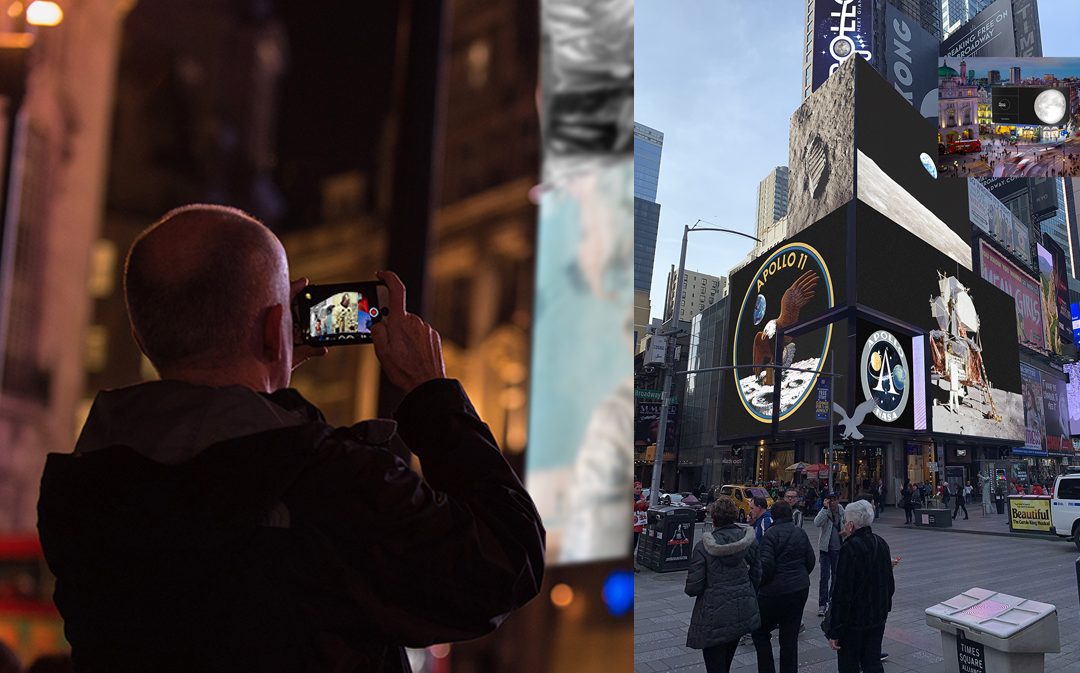 Times Square to transform into Tranquility Base, the Moon landing site,
in honor of 50th anniversary of Apollo 11
The Aldrin Family Foundation to host day-long, family educational celebration on July 20

NEW YORK –The Aldrin Family Foundation will host a day-long, free family celebration in support of The People’s Moon project on July 20 in Times Square in honor of the 50th anniversary of one of the greatest achievements of all time – landing a human on the Moon. City, state and national partners have come together to help transform the heart of New York City into Tranquility Base, the Apollo 11 landing site. From fun-filled educational activities to iconic footage from 1969 on the infamous Times Square screens to a giant Apollo photo mosaic, families will have the opportunity to spend nearly 14 hours celebrating this historic milestone.

“On July 20, 1969, the world was united as one, when humans achieved the ‘impossible’ dream of landing and walking on the moon,” said Andrew Aldrin, President of the Aldrin Family Foundation. “Our goal is to recapture that spirit and give thousands the opportunity to put themselves in the place where only 12 men have gone before and to share this historic moment, just like people did 50 years ago. Through this celebration, we hope to inspire today’s generation, give them hope for the future like Apollo did for generations before, and help them realize that their own ‘giant leap’ is right within their grasp.”

Starting at 9 a.m. EDT and until 7pm, families will have the opportunity to participate in numerous activities, including but not limited to, the following:

· Walk on the Moon – Guests will be able to walk on a giant, floor-based mosaic of the iconic Moon boot print Marriott Marquis Times Square on the 5th floor in the Westside Ballroom Salon 2 created by UK Artist Helen Marshall of The People’s Picture. The mosaic will be populated with photos from people around the world sharing their “giant leap” moments and dreams, as well as memories from Apollo 11. Some of these photos will make their way to the Kennedy Space Center Visitor Complex as a permanent digital display. Photos, story and video submissions will be accepted through July 10, 2019. Click here for info on how to submit.

· Historical Footage – The Discovery Channel will provide the video content to help guests relive key moments from the July 16, 1969, Saturn V rocket launch, as well the July 20, 1969, Moon landing and first steps. Historical footage, along with videos promoting future space missions, will be broadcasted throughout the day over select digital screens in Times Square. Clear Channel Outdoor and Champ Sports have generously donated screen time in Times Square and Clear Channel Outdoor has also donated space in select locations on billboards across the country.

· Astronaut meet and greet opportunities, an augmented reality app provided by AstroReality teaches guests about the six Apollo lunar landings and much more. For a full list of activities and times, click here.

“As America celebrates the 50th anniversary of Apollo, it’s critical that we inspire younger people to take their own ‘giant leap’ in science, technology, engineering, arts and math,” said Mike Kincaid, associate administrator of NASA’s Office of STEM Engagement. “NASA’s Artemis program will put the first woman and next man on the Moon, and send the first humans to Mars. We hope young people across the country – the Artemis generation – will come with us on this journey.”

“When our students shoot for the moon, they always land among the stars. Thank you to the Aldrin Family Foundation and The People’s Moon for hosting this celebration, which gives New York City students the chance to see firsthand the importance of science, technology, engineering, arts and math.” – Hydra Mendoza, Deputy Chancellor for Community Empowerment, Partnerships, and Communication for the New York City Department of Education.

“50 years ago, the entire world came together to experience and celebrate the first lunar landing,” said Dan Levi, EVP & CMO, Clear Channel Outdoor. “We’re honored to use our digital screens in Times Square, the Crossroads of the World, to help people from all nations countdown to and relive this historic moment.”

For more information on the Times Square Apollo 50th Celebration hosted by The Aldrin Family Foundation and The People’s Moon, visit https://thepeoplesmoon.com/events/

About the Aldrin Family Foundation

The Aldrin Family Foundation strives to cultivate the next generation of space leaders, entrepreneurs and explorers who will extend human habitation beyond the Earth to the Moon and Mars. The foundation’s STEAM-based educational tools, curriculum and programs span from a child’s first classroom experience through graduate school and professional programs. This vertical pathway unites explorers at all levels to learn from each other’s vision for space, ultimately creating the first generation of Martians. For more information, visit www.aldrinfoundation.org.

About The People’s Moon

The People’s Moon is an opportunity for all of the world’s citizens to become part of a living legacy time capsule that honors the 50th anniversary of Apollo 11. The ambitious art project created by artist Helen Marshall consists of an interactive, digital mosaic online made up of images submitted from people worldwide that will work together to tell a single story. Submitted images will be included in a print mosaic that will be installed on the ground in Times Square on July 20, 2019, and also as a permanent digital exhibit in the Apollo Saturn V Center at the Kennedy Space Center Visitor Complex in Florida. For more information and to participate, visit www.thepeoplesmoon.com.