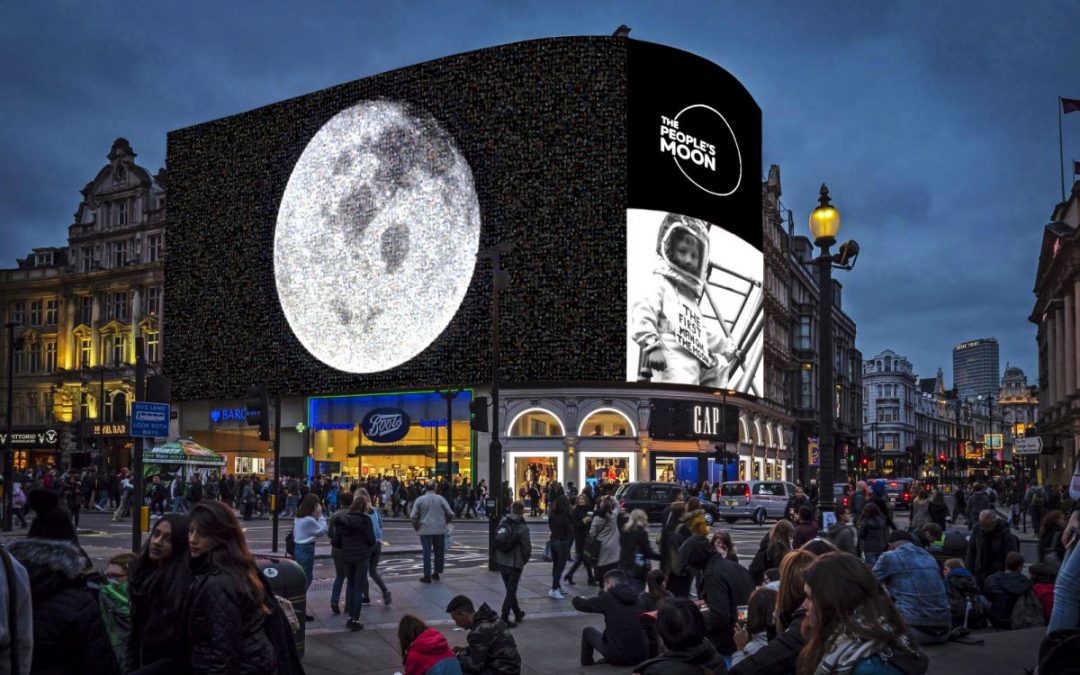 London June 2019 – Calling all armchair astronauts to participate in a mission to the Moon! Britons can join people from around the world to have the chance to be ‘placed’ on the Moon through an ambitious art project spearheaded by renowned British artist Helen Marshall of The People’s Picture. ‘The People’s Moon’ will be an interactive digital photo mosaic made up of images submitted from the public from around the world to work together to tell a single story.

Broadcast opportunity: The People’s Moon photo mosaics at Piccadilly Lights, will be shown between 9-10pm on Saturday 20 July 2019, the exact hour 50 years ago that Apollo 11 landed the first humans on the Moon. The iconic Piccadilly Lights will display public submissions submitted to the People’s Moon website. The photo mosaics will also have a permanent home on www.ThePeoplesMoon.com until 2024, the year humans will return to the Moon, including the first woman to walk on the Lunar surface. The final piece will be installed at the Apollo/Saturn V Center at Kennedy Space Center Visitor Complex in advance of the 50th anniversary of the Apollo 11 mission to the Moon which landed the first humans on the surface on 20 July 1969. The content will include historical sequences provided and co-produced by UK based Blue Aurora Media, with additional material from Stephen Slater. Moondog Animation working with Artist Helen Marshall will also showcase a collaborative moment of Moon animation using breathtaking real-time development gaming effects.

Anyone wanting to submit their story, a photograph or a video up to a minute long, can become part of The People’s Moon by uploading their photos to the project web site: www.thepeoplesmoon.com. The deadline for submissions to be considered for inclusion in the giant mosaics as part of the Apollo 50th celebrations is midnight on Wednesday 10 July 2019.

“The People’s Moon is an opportunity for the British public to join all of the world’s citizens to become a part of a living legacy time capsule,” explained artist Helen Marshall, who creates innovative photo mosaic artworks and installations at the leading edge of design and technology. She is Founder of The People’s Picture and has pioneered the concept of marking historical anniversaries, human achievement and communities in giant archive images recreated in a mosaic of pictures of people from all walks of life from her East London studio.

“Everyone on Earth has a dream. The idea behind The People’s Moon is to come together to inspire the world to dream the impossible again,” said Marshall. “We want to encourage people from around the world to be a part of our grand endeavour to create a giant art installation revealing an iconic image of the Apollo 11 Moon landing, made up of thousands of photos submitted by the public,” added Marshall.

Derek Manns, Digital Advertising Manager at Landsec, which operates the Piccadilly Lights said: “Piccadilly Lights is renowned for capturing the eyes and minds of over 300  million people that pass through Piccadilly Circus each year. This interactive experience from The People’s Moon is a great opportunity to unite people all over the world, and we’re excited to be part of the celebrations for this inspiring moment in our history.”

Previous photo mosaic tributes by British artist Helen Marshall have ranged from the centenary of the outbreak of World War One and the People’s Monarch celebrating Queen Elizabeth’s Diamond Jubilee, to the Face of Suffrage marking the 100th anniversary of British women getting the vote and numerous community and corporate commissions.

The interactive digital photo mosaic will be installed in the Apollo/Saturn V Center at Kennedy Space Center Visitor Complex, as part of the 50th Anniversary of Apollo 11 celebration. The mission, which launched from Kennedy Space Center on July 16, 1969, brought Astronauts Buzz Aldrin, Neil Armstrong and Michael Collins to the Moon, where Armstrong took the historic first steps.

“The Apollo Program was accomplished as a result of the efforts of more than 400,000 people working together to achieve an impossible dream,” said Therrin Protze, chief operating officer of Kennedy Space Center Visitor Complex. “This project gives thousands of people from around the world an opportunity to become a lasting part of the historic and important 50th anniversary of the first Moon landing and walk.”

Media enquiries can be directed to:

About The People’s Picture

The People’s Picture is a photography and design studio from British artist Helen Marshall. We are experts in visual storytelling, digital photo mosaics and bringing communities together to create, celebrate and own their unique legacy.

People are at the core of each project; people share their memories, dreams and celebrate through pictures. At the People’s Picture, each photo mosaic comprises thousands of images that represents each and every individual, telling a story that unites us as a whole.

Working in a person centered way brings out the community as a whole, and we deliver inclusive and exciting artworks that bring people together.

At Landsec, they believe great places are for people to experience and are made with the experience of great people. As one of the largest real estate companies in Europe, our £13.8 billion portfolio spans 24 million sq ft of well-connected, experience-led retail, leisure, workspace and residential hubs, with a growing focus on London. From the iconic Piccadilly Lights in the West End and the regeneration of London’s Victoria, to the creation of retail destinations at Westgate Oxford and Trinity Leeds, Landsec own and manage some of the most successful and memorable real estate in the UK. They aim to lead our industry in critical long-term issues – from diversity and community employment, to carbon reduction and climate resilience. They deliver value for our shareholders, great experiences for our customers and positive change for our communities. At Landsec, everything is experience.

“The Piccadilly Lights have been one of London’s icons for over a century, and are an unmissable sight for the 100 million people who pass through Piccadilly Circus every year.” Vasiliki Arvaniti, Portfolio Director at Landsec.

Kennedy Space Center Visitor Complex brings to life the epic story of the U.S. space program, offering a full day or more of fun, inspiration and educational activities. This includes the Apollo/Saturn V Center, which features an actual Saturn V Moon rocket, and is currently being upgraded and expanded in celebration of the 50th anniversary of the Apollo 11 launch and Moon landing. Also included with admission are Heroes & Legends, featuring the U.S. Astronaut Hall of Fame®, presented by Boeing, the Kennedy Space Center Bus Tour, Space Shuttle Atlantis®, Shuttle Launch Experience®, IMAX® A Beautiful Planet 3D and Journey To Space 3D films, Astronaut Encounter, Journey To Mars: Explorers Wanted, Science on a Sphere®, and the Rocket Garden.  www.KennedySpaceCenter.com

Moondog Animation Studio is pioneering the way our world interacts with media. Feature films, 4D theatres, interactive amusement theming; you name it. By combining old-fashioned storytelling with evolving technology; they’re able to create original experiences that are both masterful and memorable. Moondog are storytellers. Fascinated with technology; they seek to produce meaningful content that thrives in the coming decades. Whether it’s animated film or interactive media, they create engaging stories with purpose. www.moondoganimation.com

The People’s Moon UK team will deliver a workshop at the St Paul’s Way Trust Science Summer School hosted by Brian Cox for young people to make their own photo mosaic.

“The Apollo space mission in 1969 unlocked many innovative science and technology endeavours. As we celebrate  this historic milestone,  we also encourage future generations to make the ‘impossible’ happen through events like the annual St  Paul’s Way Trust Science Summer School in East London hosted by Professor Brian Cox. On 4 July 2019, we look forward to an inspirational day with 400 young people and experts from across the sciences. We are also very pleased to host The People’s Moon workshops as part of the Apollo 50 celebrations. Our thanks to AXA XL, Ibstock PLC and Well North Enterprises for supporting this event” – Lord Mawson OBE Co Founder with Prof Brian Cox and St Paul’s Way Trust Science Summer School.